Motorcycle Adventure Throughout The Americas

Las Pozas is an historical artistic site that was built by Edward James in the 1950’s which he called the Garden of Eden. It’s a labyrinth of sculptures, steps, buildings, and animal enclosures which is all built into the mountainside through a waterfall. Having a thing for art or not, this should be visited if you are in the are (It’s quite off the beaten path certainly). I almost missed my chance to visit it, even though I had planned on it prior to my trip. 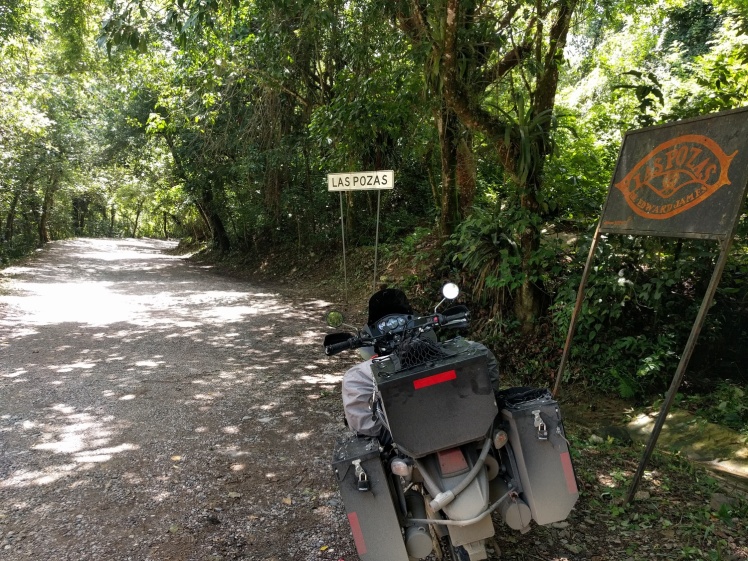 While I was heading down highway 85, I saw a sign pointing toward Xilitla. The named seemed very familiar to me, so I decided to head in that direction. Once I found signal I was able to research that it was the town SW of Las Pozas. Fantastic, I will head there and find it. The road to it was breathtaking as soaring mountains of limestone could be seen around the twisty, well paved, roads. Because of all of this I was content with continuing south after I had made it through Xilitla without finding Las Pozas. But how often will I be back here? So I turned around and started searching for it until I had found it. 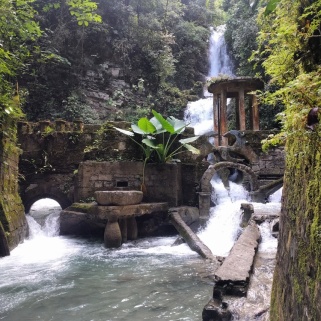 Walking the garden was beautiful. Nature had reclaimed it with moss and vegetation everywhere, which put the final piece of art into the design. I was sweating profusely and decided to sit down by the pools to relax some before getting back on the road. It was there that I saw a girl wearing a fox shirt look in my direction. It was a quick studying look, which later she came and sat near me. Just before leaving I broke the unknown by saying I liked her shirt. Her name was Laura, she was Greek, from Berlin, spoke English, and was extremely energetic. We shared stories for a bit and she kept to tradition by being a very well traveled German. She recommended I stay at the place she is staying at nearby. Sure. Why not.

With Laura on the back of the motorcycle, she directed me up and around a rocky road to the hostel. Fortunately I have had plenty of practice with these roads so I wasn’t concerned of crashing with her on the back. A few months ago, I would have certainly. The Hostel was very artistic just as was expected of an area near Las Pozas. Even more exciting was the fact that we were staying in a giant cement teepee that had 5 beds within it (I woke up in the morning with a few bed bug bites, but that’s expected of course).

We dropped off our gear and were told that their was a pool nearby which we could use to rinse off before a shower. It was wonderful relaxing in the pool and chatting. She plans to become a nurse and is a very kindhearted person that is also a vegetarian (she couldn’t become vegan because she loves cheese). While we were these, two locals showed up and were a pleasure to add to our conversation. They directed us to the river where there is a pool called “the pool of paradise”. I am sure there are many pools named this, but it really was beautiful. The bottom was cemented out for safety, so we were able to dive, flip, and jump into it without concern other than the freezing water. Both Laura and I declined their later invitation to go out into town. It was too far and we were both tired. So instead, we

just had dinner, drinks, and very blunt conversations (Yeah, us Americans can be a bit coy on some subjects and its not just me).

In the morning she was kind enough to share some of the groceries she had bought. After which I said my goodbyes and rode off completely refreshed. It was very nice to have shared beliefs and traveling companionship for a small moment. I want more of those throughout this trip, so I am now going to try and stay at more and more hostels. Sure they all wont be the greatest experience, but the vast majority of them should bring new experiences and fellow travelers.

One thought on “Las Pozas And Laura”